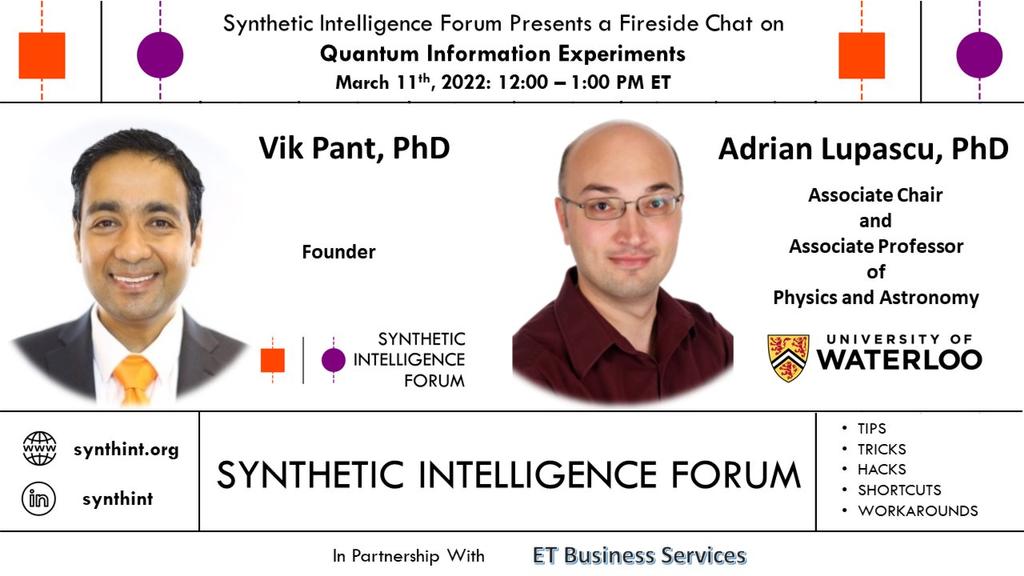 Synthetic Intelligence Forum is excited to convene a session about “Quantum Information Experiments” with Adrian Lupascu, PhD (Associate Chair and Associate Professor of Physics and Astronomy, University of Waterloo).

Topic: Quantum computers are known to be efficient for factoring numbers. They can efficiently simulate solid-state compounds and molecules, enabling the design of new chemicals, materials and drugs. Quantum scientists have also built heuristics for solving hard instances of optimization problems.

Most experts predict that within the next few years we will have a large enough quantum computer to enable an advantage for some real business problems. However, it is still unclear exactly which problem it will be. Most expect that quantum advantage will first be achieved in one of three areas: machine learning, simulation of quantum materials (e.g. chemistry), or optimization.

Today’s fully quantum computers and quantum simulators are large enough to explore potential use cases by integrating them with classical computers. While hybrid solutions might demonstrate quantum advantage, most applications will more likely require additional hardware development before this is possible.

Quantum-inspired solutions, on the other hand, make it possible to solve larger instances. These solutions, though lacking the full power of quantum computing, approach problems in a similar way and may offer advantages over legacy methods. In addition, their design offers a straightforward translation to fully quantum computers and makes them a useful window into their performance.

He will outline these connections with a particular focus on quantum technology based on superconducting devices, one of the leading candidates for the implementation of a quantum computer. In the final part of the talk, he will discuss some of the current priorities of the field in the quest to build powerful quantum computers.

Biography: Professor Lupascu is an experimental physicist interested in the quantum dynamics of various types of physical systems and the application of quantum effects to build new types of detectors and quantum information processors.

Professor Lupascu received his BSc from the University of Bucharest, Romania, in 2000. His undergraduate thesis focused on scanning probe microscopy studies of thin polymer layers deposited on metallic surfaces.

He then moved to the Delft University of Technology, Netherlands, where he obtained his PhD title in 2005, under the supervision of Professor J. E. Mooij. His PhD work involved the development of quantum measurements for superconducting qubits. He continued his research on quantum measurement and decoherence during a one year postdoctoral position in Delft.

In 2006, Lupascu became a Postdoctoral Fellow at Ecole Normale Superieure Paris, in the group led by Professor S. Haroche and Professor J. M. Raimond, supported by a Marie Curie fellowship. During this time, he did research on cold atoms and superconducting detectors.

Professor Lupascu joined IQC and the Department of Physics and Astronomy at the University of Waterloo in March 2009 as an Assistant Professor. In 2011 he received a cross-appointment in the Department of Electrical and Computer Engineering. Lupascu became an Associate Professor in 2014.

In 2011, Lupascu was the recipient of both the Alfred P. Sloan Research Fellowship award and Ministry of Research and Innovation Early Researcher award.

Special Thanks to our Partner:
• ET Business Services